THESE ARE AMERICA'S REAL HEROES ! 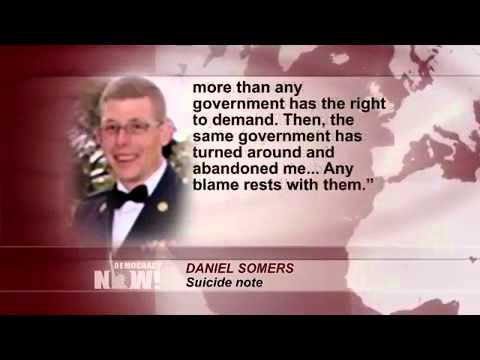 Daniel Somers, like many Veterans, was forced to do things that conflicted with his sense of right, and wrong, durring war causing him to suffer what we now call Post-Traumatic Stress Disorder.

The Suicide Note of Gary Pressley

The mother of a Navy veteran who killed himself in the parking lot of a Department of Veterans Affairs hospital last year filed a wrongful death lawsuit this week, accusing the VA of negligence in her son's death.

Machelle Wilson of Forysth, Georgia, is seeking $8.25 million from the VA. Her claim states that a VA doctor abruptly discontinued her son's opioid prescription, which he used to manage chronic hip and back pain. The lack of medication caused him to suffer pain and withdrawal symptoms and pushed him into crisis, the claim says.

Gary Pressley, 28, a former aviation ordanceman in the Navy, shot himself in the chest April 5 in the parking lot of the Carl Vinson VA Medical Center in Dublin, Georgia. He had just left the hospital's pharmacy, where he tried in vain to have his pain medication refilled.

"Nobody listened to him," Wilson said. "The signs were all there."

fore shooting himself, Pressley wrote a note and placed it on the dashboard of his car. In part, it read, "This is what happens by punishing already suffering people."

Last year, Pressley's suicide was one of three during a five-day period on VA property.

The deaths prompted scrutiny from Capitol Hill, where lawmakers held a hearing and news conference to draw attention to the issue.

Justin Miller was a guard in Iraq who provided security at a Military Base where he stated he had to shoot Camels, that sometimes had people on them.

He had Suicide thoughts and went to the Minneapolis VA where they treated him Four (4) Days, and released him.

Justin Miller walked to his car in the VA Hospital Parking Lot and shot himself. He was 33 Years Old.

The VA never flagged him as being a high-level Suicide Risk so he never got help from the VA.

Justin Miller's Family say that a lack of resourses, and funding, stopped the VA from helping Justin.

You can read his story by clicking here. and here (Parking Lot Veteran Suicides).

John Toombs served in Afghanistan in the Army and returned to the states Unable to Adjust, the same way many Disabled Vietnam Veterans did, and he ended up with a drug problem.

The VA tossed him out of the drug program for being late getting Meds, and John became determined to get some help with his problems so he spent the night at the VA Emergency Room at the Murfreesboro Tennessee VA Hospital.

After being denied help all night the next day John recorded a Suicide Video on his phone stating;

"When I asked for help they just opened a Pandora's Box inside me, and just kicked me out the door. That's how they treat Veterans around here".

You can read about his story here.

We Will Keep Posting More Memorandums Here as we Research Them.

If you have a link to a Veteran Suicide Please E-Mail Us by Clicking Here.