Low-Lifes Trump Put in Charge of the VA - VetsForJustice

Low-Lifes Trump Put in Charge of the VA

VETERAN HATERS, POLITICAL APPOINTEES, AND LOW-LIFES PRESIDENT TRUMP HAS RUNNING THE DEPARTMENT OF VETERANS AFFAIRS
No Morals, No Ethics, No Respect for Veterans, Veterans Rights, or the Law, and Bonsuses for Abusing, and Cheating Disabled Veterans, describes President's Trump's Department of Veterans Affairs 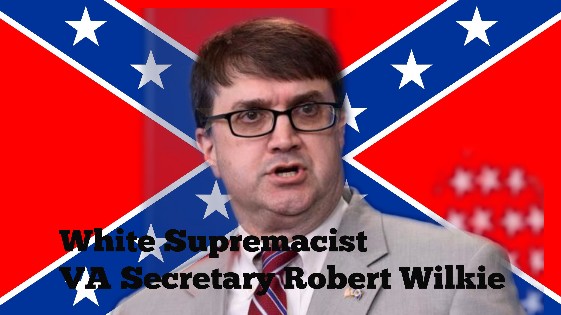 Robert Wilkie made it clear that he hates Veterans, and only accepted the job as VA Secretary, as a stepping stone to a higher Military Job as head of the Pentagon.


President Trump went out of his way to appoint the very worst person he could find to be Secretary of the VA, to assure Disabled Veterans would continue to be cheated, and denied adequate medical care.

VA Secretary, Robert Wilkie, is not only a racist, but he is also a "Rich Kid Elitist" who believes that America's Disabled Veterans are far benieth him, and not deserving of benefits, so he refuses to respond to letters from lowly Disabled Veterans.

For President Trump to brag that "Veterans have never had it so good", to defraud the public out of Millions of Dollars in Political Donations, when Trump has made the Department of Veterans Affairs far more dishonest, and corrupt, than it has ever been, as his Administration drives Twenty-Two (22) Disabled Veterans to suicide each day, constitutes Wire Fraud, Mail Fraud, and Election Fraud.