Disabled Veterans Have No ADA Rights in Florida - VetsForJustice

Disabled Veterans Have No ADA Rights in Florida 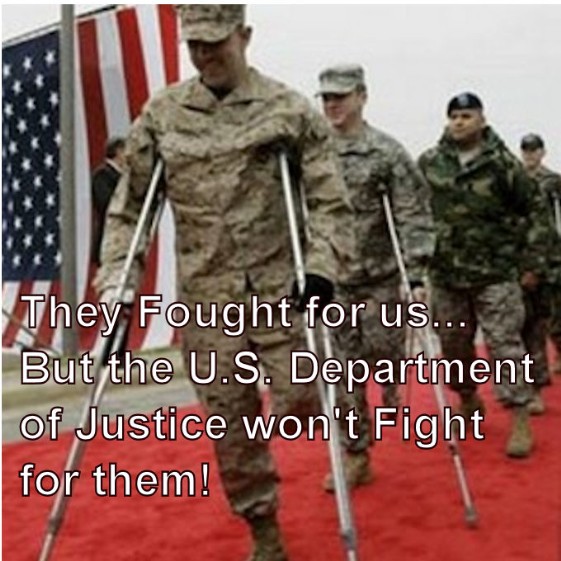 Disabled Veterans needing Service Dogs cannot go to a Beach, or Park, or shop in Florida.

The United States Department of Justice has a Statutory Duty to enforce the Americans with Disabilities Act (ADA) that provides Equal Access to State, and Public Facilities for the Disabled.

However, under President Trump the U.S. Department of Justice, Civil Rights Division, will not respond to ADA Complaints from Disabled Veterans, or make any attempt to investigate, or to protect the Disability Rights of Disabled Veterans.

It is the view of President Trump, and his Justice Department, that Elderly, Disabled, Vietnam Combat Veterans are NOT Human, and do NOT deserve any Human Rights.

But Trumps Justice Deparetment cannot stand the idea of letting an Elderly, Disabled, Vietnam Combat Veteran sit on a beach in Florida with his Service Dog, visit a park in Florida, shop in a store, buy food, eat in a resturant, or have any Human Rights.

Disabled Veterans in Trump's America are only allowed to sit at their home, counting the minutes, Waiting to Die.

President Trump, and his Administration, does not consider America's Disabled Combat Veterans to be Human, or Deserving of Basic Human Rights.

Since returning from Vietnam in 1969 I have been Tortured, and Victimized, by one Illegal Scheme, after another, by Corrupt Government Officials, from the Army, to the VA, to the United States Department of Justice, which is covering up the Intentional Murder of Disabled Veterans.

For the past Fifty (50) Years I have watched my fellow Vietnam Veterans being Tortured, and Intentionally Driven to Suicide, by the same, exact schemes.

I have fought the Army, and VA, for Fifty (50) Years as both refused to comply with the Freedom of Information Act, hiding "Key" Army, and VA Records, so they could conceal their Crimes.

Recently the VA screwed up and sent me many of my "Key" VA, and Army Records, the Government has been illegally concealing from me for the past Fifty (50) Years.

My Official Army, and VA Records, prove the United States Government has Murdered OVER One Hundred Thousand (100,000) Disabled Veterans by Intentionally Driving them to Suicide, in a Government Scheme to reduce the cost of the Vietnam War, by stealing the VA Benefits they EARNED.

If that doesn't work it's the VA's turn.


The Veterans Administration uses a "Disabled Veterans Con Game" in which the VA habitually lies, falsifies Paperwork, Shreds Records, Conceals Records, and All Evidence Favorable to the Veteran, Suborns, and uses Perjury in Court, while using Dilatory Tactics, waiting for the Veteran to die, before processing their Disability Paperwork.

The VA also schemes with the Military in a "Secret Article 15 Con Game" in which the VA illegally uses Article 15's to fraudulently claim Veterans with Bad Paper Discharges have Dishonorable Discharges, so the VA can steal their VA Benefits.


The VA destroies Veteran's Families, starves Veterans, making them eat out of garbage cans, and sleep in the woods, and under bridges, and will commit any crime, or wrongful act, to steal a Disabled's Veterans VA Benefits, and drive the Veteran to suicide.

So far, the Army, and the Veterans Administration, have driven OVER One Hundred Thousand (100,000) Disabled Vietnam Veterans to suicide.

Today it is estimated that OVER Five Hundred Thousand (500,000) Disabled Veterans have been MURDERED by the VA with the "VA Medical Waiting List Con Game" while the Justice Department covers up the MURDERS by VA Officials.

Home Page | Veterans Memorial Page | It All Starts with the Military! | The VA's Many Schemes to Defraud Vietnam Veterans | The No Ethics, No Morals, VA Office of General Counsel | "Dirty Cops" The US Department of Justice | Disabled Veterans Have No ADA Rights in Florida | How Our Government Got So Corrupt | Dying Vet Wants One Day of Honesty from VA | Female Veterans Discriminated Against by DVA | Low-Lifes Trump Put in Charge of the VA | President Trump Abolishes Veterans Rights | President Trump Uses the VA for Political Pay-Offs | Court Says Disabled Veterans Have NO Rights! | Veterans Rights Heroes | Links to Friends | Something to Say ? Post your Comment below! | What YOU Can Do to Fight All this Corruption! | Tort Claim Filed | About Us | Contact | General Site Map
Back to content | Back to main menu