COMCAST HAS THE CAPABILITY TO HACK, AND CHANGE THE PRESIDENTAL ELECTION RESULTS !
And the Ability to Spy Inside Nearly Every Home in America, on Your Cell Phone, Home Computer, Laptop, Your Smart TV, XBOX, and Playstation ... 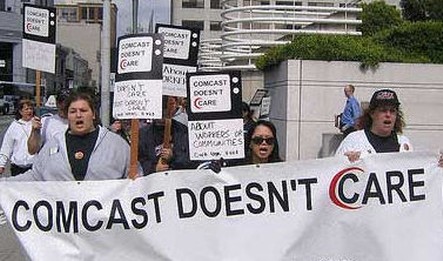 The Worst Company in America

Comcast is known as the worst company in America, and its not just because of their horrible customer service.

A quick search on the internet shows that Comcast has engaged in just about every kind of Customer Disrespect, Customer Fraud, and Criminal Conduct, a corporation can commit against its customers.


Owner, Brian L. Roberts, is Personally Responsible for Every Fraudulent, and Criminal Act by Comcast

Owner, Brian L. Roberts, owns, or controls, all of the Class B Supervoting Shares of Comcast Stock, which gives him an "Undilutable" 33% Voting Power Over Comcast.

A very sick, and perverted, Brian L. Roberts, has set the Policy for Comcast to target, deceive, defraud, and cheat, America's most vulnerable, the Eldery, the Disabled, Veterans, Military Families, and Disabled Veterans.

If any "Normal Person" committed the crimes, Brian Roberts has committed, they would be in prison for the rest of their lives, however Brian L. Roberts is a very powerful Billionare who OWNS Politicans, and Government Officials he has bought, making him like a God in America, far above any Federal, or State, Law.

Read on, and see WHY Comcast's Sleazy Owner, Brian L. Roberts, is above the law, how Comcast spys on you, in your OWN home, and how Brian L. Roberts Poses a More Serious Security Threat to America's Elections than Russia, and China, combined.

Comcast gets by with non-stop abuse of its customers, and constant crimes, by using the vast amounts of money, it has cheated its customers out of, to bribe both Political Parties, and every Federal Agency that is supposted to oversee Comcast, and make them operate honestly.

Those "bribes", in the form of Political "Donations", gifts from Comcast Lobbyists, and other payoffs, has made Comcast an Internet Crime RICO Family Monopoly, far more powerful, and further above the law, than any Mafia Crime Family in America's History.

FCC Employees that protect Comcast from the law, and allow Comcast to defraud its customers, end up leaving the FCC and getting Vastly OVERPAID Millionare Jobs with Comcast.

There is no oversight because the FCC is OWNED by Comcast Lobbyists. [Four months after FCC Commissioner, Meredith Altwell Baker, approved a Comcast buyout of NBC she quit the FCC to take a Million Dollar Job with Comcast. This is called "Quid Pro Quo".]

Home Page | Veterans Memorial Page | Comcast Veteran Con-Game | "Dirty Cops" The US Department of Justice | Veterans Rights Heroes | Something to Say ? Post your Comment below! | About Us | Contact | General Site Map
Back to content | Back to main menu